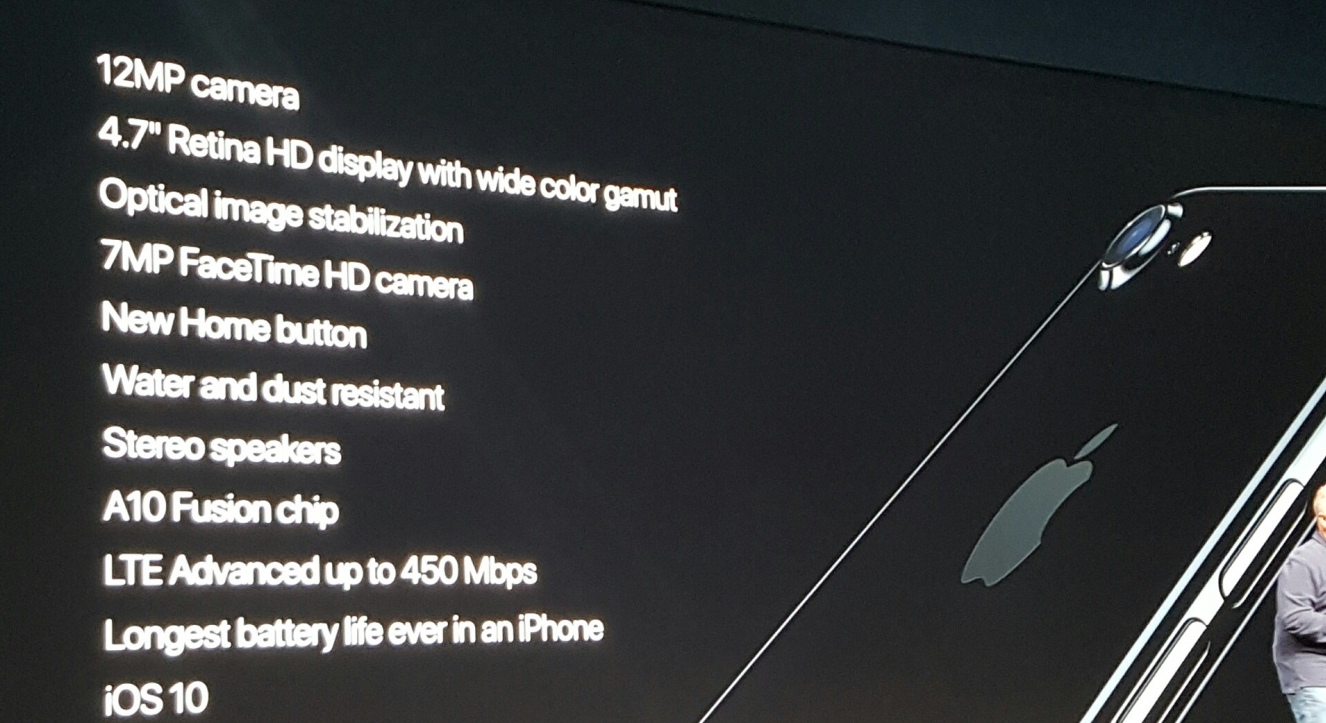 Wait is over. Tim cook arrived on stage. Tim Cook is ready with his keynote.  No other product is waited with eagerness as iPhone is awaited. It is live now, 10 New features in iPhone 7

Airpods cost $169 and will be shipped in october. Second – Home button. it is now force sensitive, and has a new-generation taptic engine

Third : . The new iPhones will be water- and dust-resistant. IP67 standard

Fourth : Camera = iPhone 7 has just one camera but it has Optical Image Stabilisation (OIS). It has a 7MP FaceTime HD camera and 12-MP rear camera with OIS.

Fifth : Display Retina HD display is 25% brighter than iPhone 6S or 6S Plus

Sixth : Audio : iPhone 7 and 7 Plus have stereo speakers, it has two speakers one on top another on bottom. Seventh : Ear Pods connect over the Lightning port, There’s an adapter for Lightning to 3.5mm adapter and it’ll be included in the box with iPhone 7 and 7 Plus

Eight : Wireless – comes with new wireless headphone. AirPods have a W1 Apple-designed chip. No cable to connect them. They only play when you’re ready to listen. You can double-tap the AirPods to activate Siri. Ninth : Apple Play – iPhone 7 and 7 Plus, Apple Watch Series 2 includes Felica, an NFC technology used in Japan. Rolling out in October, along with transit on Apple Maps

Tenth : Performance – A10 Fusion processor, with four-core processor with 3.3 billion transistor. It has two high-performance cores. 40 percent faster than 6S. Graphics – 50 percent faster than A9 chip used in iPhone 6S. console-level gaming possible on the iPhone. F1 2016 is coming to iPhone. longest battery life every in an iPhone about 14-15 hours on WiFi.

iPhone 7 Plus will have a dual-camera setup. Two 12MP cameras built-in on iPhone 7 Plus. One is wide-angle and the other is a 56mm telephoto

Apple’s Senior VP of marketing, is on stage to talk about the iPhone 7, Mr. Phil Schiller

“pristine mirror-like surface” that what iPhone 7 will be having

As always and all time said, It is best iPhone we have ever created !

Yes it is called iPhone 7

Tim Cook is back on stage

Apple Watch Price Announced : Apple Watch Series 2 will be priced $369 Series 1 will get dual core at $269 Apple Watch (Series 2) has been re-engineered. It is swim proof and water resistant for up to 50m

Wow : The speaker will eject the water

APPLE WATCH: 1000 nits, that is brighter than most smartphones screens. So you won’t have any issues under the sun

There will be ceramic version of the Watch this time

Apple watch has two new workouts – open water swim and pool swim, it is going to be loved by swimmers

Apple Watch 2 has a built-in GPS. This is a boon for runners It’s water-resistant to a depth of 50 meters

Swim-proofing could be a game-changing feature for the Apple Watch.

The Apple Watch app does let you spin Pokestops and collect items.

Niantic Labs’ CEO John Hanke is on stage, says Pokemon Go has been downloaded more than 500 million times. And trainers have collectively walked 4.6 billion km while playing the game

Pokemon Go will be on the Apple Watch. ConnectED: Tim Cook throws light on Apple’s initiative to bring technology in to the field of education

Apple’s created a program called Everyone Can Code. To help students learn coding Apple’s iWork apps will now support real-time collaboration. Must be mentioned here that it similar to Google Docs

Tim cook announces that ‘Super Mario Runs’ will be the brand new game for the iOS platform.

140 Billion apps have been downloaded from app store.

It is 10th year of Apple Music.

Today All rumors will be rapped up, We are for record mentioning a few selected most talked rumors in town.