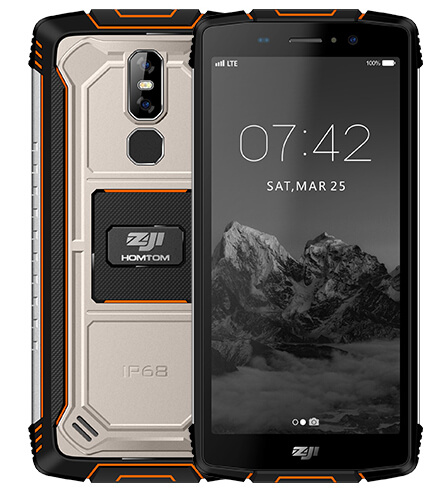 Homtom is Chinese brands and have expansion in Russia, Italy, Spain, Portugal, UK, Germany and Netherlands. It has launched Zoji Z9 is rugged series and in same series it is coming with Zoji Z11. Zoji Z11 comes in 5.99 inch Full HD+ in cell display. Also, it has LCD+ digitize panel below below front glass to provide sharper and vibrant photographs, Video and texts.

Homtom Zoji Z11 sports aabandon 10000 mAh battery with 9V/2A quick charging. It has IP68 to safe guard phone and tested for waterproof in river and sea. It comes G+G corning gorilla glass type 3 which make is strong enough to save on hard ground.

Zoji Z11 comes with distinctive mirror surface back for stunning look. It features 1.8GHz octa-core processor with Mediatek MT6750 chipset and sports 4GB RAM and 64GB ROM. It also comes with face unlock to turn on the phone faster and quicker.

Homtom zoji Z11 has 10000 mAh battery capacity for really longer life. It comes with 900 hrs standby and 60hrs talk time. It can be used as a power bank to charge other phones. Zoji Z11 has 9V/2A quick charge to refill phone faster.